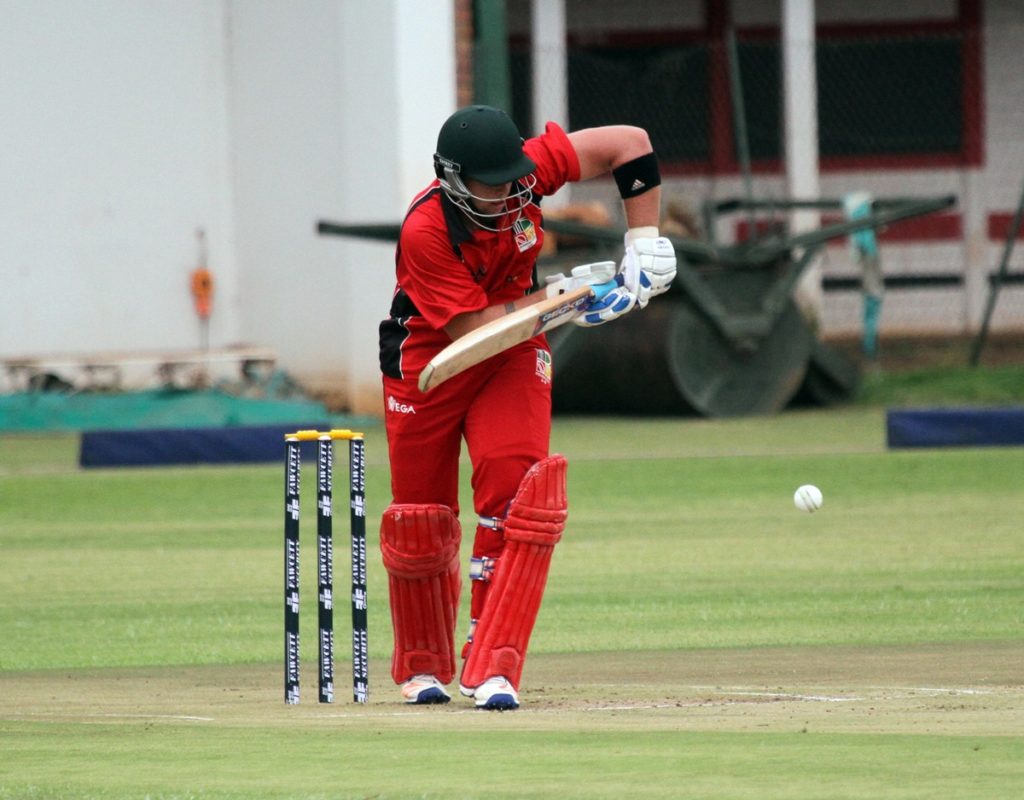 Off-spinner Wesley Madhevere led a polished bowling performance by the Zimbabwe Under-19 side as they secured a 59-run win over the Namibia Under-19s in a youth one-day international match played at Harare Sports Club today.

After posting 173 when put in to bat first, the hosts never looked in trouble defending the total with Madhevere bagging three wickets while there were two each for Milton Shumba and Liam Roche.

Eben van Wyk’s 49-run knock was the match’s top score, but so dominant were the Zimbabwean bowlers that apart from him as well as Gerhard Lottering (12) and Petrus Burger (11), no other Namibian batsmen managed to get their scores into double figures. Earlier, the hosts had also struggled for runs, with Liam Roche, who made 32, contributing the most with the bat.

After the first match between the two sides was washed out without a ball being bowled, the rains stayed away today although the skies remained overcast.

Tanunurwa Makoni and Jayden Schadendorf came out to open the batting for the Zimbabwe side and appeared to have quickly settled in well despite the unfavourable conditions, as they put up a 34-run stand before Makoni – who scored 14, including a boundary, off the 16 deliveries he faced – was bowled by Ben Shikongo in the seventh over. Seven deliveries later, Jayden Schadendorf was following his opening partner back to the pavilion after he was also bowled by Shaun Fouche, leaving the Zimbabweans on 37 for two. His 15, off 24 balls, included two fours. Dion Myers and Milton Shumba then struck up a third-wicket partnership of 29 that was only broken when Mauritius Ngupita uprooted Shumba’s stumps for 12 in the 17th over.

Myers added two more runs before the Zimbabwe Under-19s were reduced to 68 for four after Gregory Dollar gifted a return catch to Ngupita without scoring from the seven deliveries he faced. Ngupita struck again in the 21st and 23rd overs, first dismissing Wesley Madhevere for one before getting Kieran Robinson caught by van Wyk for two; 72 for six. The home side appeared to have seized the initiative back with Myers and Roche in tandem, with the duo bringing up the team hundred in the 29th over before Myers was run out the very next delivery having scored 31 off 66 balls; 107 for seven.

Dane Schadendorf scored eight off 21 deliveries before he was trapped lbw as he attempted to reverse-sweep Petrus Burger, leaving the Zimbabweans reeling at 125 for eight in the 37th over. Dion Mazhawidza however came out guns blazing, joining Roche on the crease for a 24-run stand that was ended in the 42nd over when Roche, who top-scored for the hosts with 32 off 58 balls, was caught by Donovan Zealand to give Fouche his second wicket; 149 for nine. With Jonathan Connolly now on the other end, Mazhawidza did not ease up, lofting Fouche over mid-on for the match’s only six in the 44th over, before driving Shikongo to the boundary two balls later. Unfortunately, the very next delivery Mazhawidza perished when he was run out having made 28 off 23 balls – his knock included three boundaries and one maximum.

Thus Zimbabwe folded for 173 in 44.2 overs, with Connolly finishing unbeaten on four. 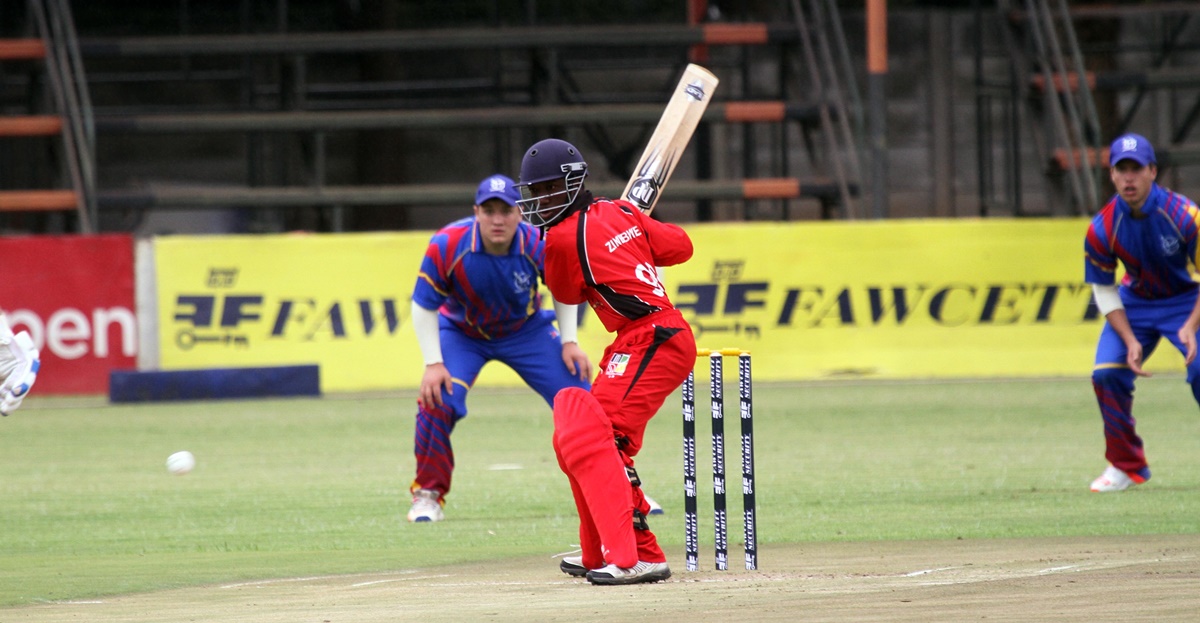 Ngupita, who took four wickets for 34 runs in his 10 overs, was easily the standout Namibian bowler. Franco van der Westhuizen and van Wyk came out to mount the Namibians’ chase, but they found the opening seam duo of Mazhawidza and Connolly almost unplayable. By the sixth over when van der Westhuizen became the first wicket to fall, caught by Myers off Roche having scored three, the visitors only had a total of eight runs on the board. After seven overs, lunch was called with the Namibian Under-19s on 10 for one, van Wyk with five and Fouche yet to get off the mark.

It was not long after the break before Roche struck again, removing Fouche for five in the 12th over; 25 for two. Soon they were 36 for three after Connolly claimed the scalp of Erich van Mollendorf, who made seven off 21 deliveries. For the next 10.3 overs, van Wyk and Jan Nicole Eaton-Loftie ground out a 45-run partnership that took the team total well beyond fifty before the latter was run out for nine; 81 for four. Off the penultimate delivery of the 30th over, van Wyk was caught by Madhevere off the bowling of Mazhawidza, falling just one run short of what would have been a well-deserved fifty – he scored 49, including four boundaries, off 86 balls.

His departure left the Namibians in a precarious position, reeling at 86 for five and needing 87 runs off the remaining 121 balls but without any recognizable batsmen left.,Five deliveries later, and with only two runs added to the total, Madhevere took the wicket of Henry Brink who managed only four runs off the 17 balls he faced. Burger and Lottering offered the tourists’ last mesh of resistance, scoring 11 and 12 respectively, before their departure set off the demise of the tail. The Namibians were bowled out for 114 in 40 overs, giving Stephen Mangongo’s charges a big 59-run win.

Madhevere starred with the ball for the home side, taking three wickets for 23 runs in his 10 overs. There were two each for Shumba and Roche, while Mazhawidza and Connolly were rewarded with one wicket apiece for the efforts. The two sides will meet again at Harare Sports Club tomorrow for a Twenty20 match starting at 1000 hours, before they lock horns in the third 50-over game at the same venue on Thursday. Fawcett Security is the Zimbabwe Under-19 side’s official shirt sponsor for the 2017/18 season.

Simply fill out the form below & we will get in touch with you.

Since 1959 Fawcett Security has proudly been the leading security company in the Zimbabwean Security Industry. Providing the highest possible standards of service delivery, training & manpower development.

Please take the time to complete our customer satisfaction survey.